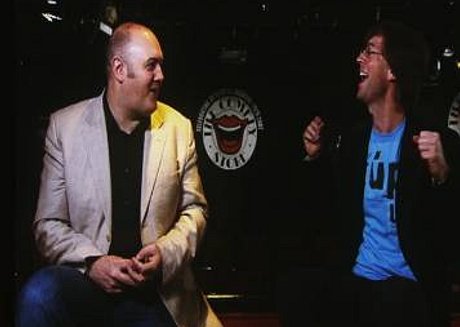 No Béarla 2 is a follow up to Manchán Magan's initial No Béarla series, in which he looks more deeply at why it was so difficult for  him to survive using only Irish and why the reactions to his efforts were so complex, intense and multilayered.

In a humorous exploration of the Irish language, Manchán sets out to find out WHAT WOULD HAPPEN IF:

3 INTERESTING ARTICLES ON THE IRISH LANGUAGE

Extract on Gaelscoileanna from David McWilliams’ The Pope’s Children

"Gaelscoileanna were once seen as too Catholic, too nationalist and too old-fashioned. Today, they are the school of choice for the sophisticated elite . . ." Read

Interesting article on Irish Language article by John Waters, Irish Times June 2006.  "The surely unsurprising news that the standard of spoken Irish is, as one newspaper headline puts it, “in freefall” may represent the most critical moment for generations in the story of the “first official language”. . . .Read

'The Sound Within' an article by Kate Fennell. "When I was uprooted from Conamara, the world of sounds that I knew vanished almost completely. I started to make new sounds . . ." Read

ARTICLES BY MANCHÁN ON IRISH.

Cá bhfuil na Gaeilgeoirí? by Manchán Magan, The Guardian, Fri 5th January 2007
(An edited version of this also appeared in the Irish Times on the same day, under the title  'Where are all the Irish Speakers?'

Around the world for Lazarus, The Irish Times, Oct 24th 2006
Manchán Magan recalls his first attempts at filming in Irish for TG4 in 1996, at a time when he thought they might all be flogging a dead horse.

No Béarla should be available on You Tube, but music copyright issues means that it gets deleted occasionally.

No Béarla 2 clip: Would You Recognise Irish From Kling-on?

No Béarla 2 clip: Dara Ó Briain admits to ignoring the 'fada' in his name

No Béarla, was a 4-part series in which Manchán Magan attempted to live his life (eat, travel, socialise, find accommodation, shop, etc) through Irish. It was a journey to find out whether the 1.6 million people who claim they can speak Irish in the national census really can .... and whether one can survive in Ireland today without speaking a word of English.

In the course of his travels Manchán gets kicked out of bars, served the wrong food, given the wrong directions, the wrong clothes, the wrong haircut. He gets abused, insulted, treated as an imbecile. When his car breaks down he finds he can’t get a mechanic - directory enquiries simply laugh at him. Likewise, he gets jeered at trying to chat up girls in a nightclub in Donegal. On the Shankill rd, he is warned that he’ll end up in hospital if he continues  speaking the language. In Galway he tries busking, singing the filthiest, most debauched lyrics he can think of to see if anyone will understand - old ladies smile and tap their feet merrily as he serenades them with filth. In Killarney he stands outside a bank, promising passers-by huge sums of money if they help him rob it, but again no one understands. He may as well be speaking Kling-on.

In short, No Béarla was a thousand mile road trip around Ireland involving a lot of pointing, miming and desperate gesticulation. It cast a cold eye on the state of Ireland’s first official language - watch it and weep, or laugh . . .

A Dearg Films production for RTÉ/TG4