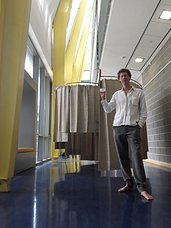 Gaeilge Tamagotchi has been performed in many venues since the first 835 people turned up to the Project Arts Centre, Dublin, in September 2015 to foster a word. Thousands of words have been saved, thousands still await foster homes.

For Manchán's Irish Times article on the project see here.

The Irish language has 4,400 different words merely to describe someone; to convey their character, their demeanour, their shape or stature.

They are rarely used now. Many are already dead.  Would you be willing to adopt one?

To take on a weakened, endangered term? Mind it, cherish it with your tongue. Slip it into sentences? Name a pet or loved one after it?

dril – drop glancing in the sun

In Gaeilge Tamagotchi Manchan invites you to adopt an Irish word. Participants wind through a labyrinth of 30m of raw Irish linen to receive an endangered Irish word from the artist, which they agree to nurture, nourish and take guardianship of. They each receive a word unique to them and are given the opportunity to print or paint their word on stone, oak-wood or linen as a ritualistic covenant.

A theatrical installation in which Manchán invites you to adopt an Irish word in order to breathe life into it.

Things people have done with their adopted words