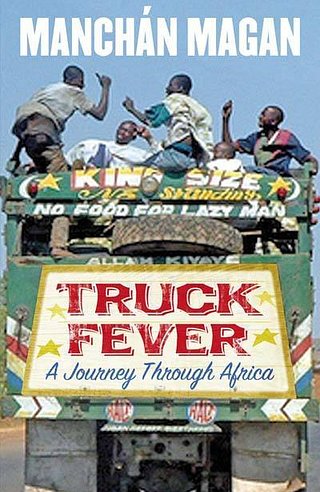 Oddballs: a novel of Affections (Brandon, 2010)

Angels & Rabies is an exploration of the culture and sociological makeup of the Americas, from its conquistador pioneers to today’s Disney Channel aficionados. Manchán, an inquiring and slightly unhinged young man, finds himself amidst the marginalised wherever he is: shamans murdering missionaries; Israeli conscripts seeking absolution; tree-huggers in love with loggers; cannabis growers influencing the CIA with mind-meld techniques; women addicted to menstrual blood and enema junkies seeking enlightenment.

By burrowing beneath the skin of alternative societies from Ecuador to Seattle, he reveals a radiograph of the bones and nerve-endings that make up the Americas. It’s a poignant and farcical book, wise and deranged; about adventure, love, transcendence and aspiration.

Angels and Rabies - a journey through the Americas   (Brandon, 2006)

Manchán travels overland from London to Nairobi in a truck with a group of squabbling, treacherous cast-offs of Thatcher's Britain, including privately educated schoolgirls, a predetary market gardener, a former torturer from the British Army, a locksmith claiming to be a UFO abductee, three conniving nurses and a prim quantity surveyor. A rollercoaster of adventure, anecdote and fresh observations about the nature of Africa and the impact that travelling  through it has on all concerned.

A rollercoaster ride through the mad masala of modern India, a culture pole-vaulting from the middle ages to the future. This entertaining, offbeat travelogue by an Irish tv documentary maker is a true story of deluded maharajahs, murderous environmentalists, sex-obsessed yogis, and bizarre high-society belles. It stretches from women throwing themselves on funeral pyres in the deserts of Rajasthan, to mind-reading children in Himalayan forests and devious missionaries on the shores on the Ganges.

It begins in the Himalayas, where Manchán (aka Mocha) has blissfully dropped out, when suddenly he gets a call from his brother who is coming to India to make a tv travel series and wants him to present it. First, he has to sort out Tara, a patient in the local leper station who is threatened by the community for being gay; he brings him to Delhi, leaving him in the care of a band of hermaphrodite dancers.

Do the brothers succeed? Is Tara forced to make the ultimate sacrifice that the eunuchs demand? And what of the Norwegian man who begs Mocha/Manchán to track down a two thousand year old immortal yogi? It’s a bizarre and truly helter-skelter journey through the subcontinent, ending in triumph on the roof of the world with Manchán and his brother managing to befriend the Nepalese secret service and thereby escape years behind bars.

A richly amusing debut novel of loners and eccentrics, a kooky, deranged love story with its heart in just the right place

In New Hampshire Rachel’s world falls apart when her boyfriend dies on their last day of school. Gouging her skin with blades no longer gives relief but the arrival of a stranger - claiming to be a long-lost aunt – changes her life forever. Together they travel and a tale of chance and despair turns into a weirdly compelling love story. Rachel couldn’t have known her quasi-aunt was going to end up stealing and ship-wrecking a yacht in her attempts at channelling dolphin consciousness; nor could she have guessed that the oddness of the coast-guard who’d rescue them would only be surpassed by his brother’s. Suddenly, we are  in the company of some true eccentrics in a remote Irish coastal village - a deluded coke-snorting witch, a burnt-out fisherman who dances for tourists and a boy who is fixated on freeing electricity from sockets. All are nursing past hurts and only together do they have any chance of healing.

A series of outrageous adventures amidst the ring forts and tourist traps of Ireland ends with one of them plunging from the cliff-edge into the Atlantic and two more falling deeply, if unconventionally, in love.